The primary parts of the railroad network in Germany were established by 1890. From then on local railways (branch lines) in standard and narrow gauge track were build to gain better access to less inhabited areas. In Germany these railroads were called "Kleinbahnen", these railroads served a lot to the economical development of their areas. They gave inexpensive and fast transportation for food, goods and material. Only by use of these railroads the people in the countryside were able to reach for jobs away from home. The railroad itself gave work and payment to many people. But by 1950 the automobile began to take the place of the local railroads.

In 1964 four railway enthusiasts met in Hamburg to found the Deutscher Eisenbahn-Verein e.V. (DEV), inspired by the idea to preserve such a branch line railroad. They went on to establish an outdoor museum railway for presentation of historic railway operation:

Only 19 month of preparation were needed for the DEV to start operation on the branch line from Bruchhausen-Vilsen to Asendorf by July 2nd, 1966. The "First Museum Railway of Germany" is the oldest outdoor railway museum in Germany.

More than 50 years have passed and a huge collection of rolling stock has gathered at Bruchhausen-Vilsen. Most of these vehicles are for 1000 mm narrow gauge track and nearly all are operational: 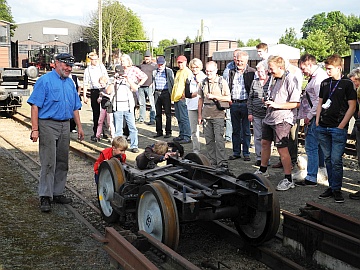 of different technical style are ready for operation.

These vehicles and the tracks are serviced and maintained by the members of the Deutscher Eisenbahn-Verein e.V. during leisure time. The museum railway is operated by the active members. Every volunteer railwayman is trained for his range of duties and has to pass the appropriate examination before taking up his job. Our goal is to provide a living branch line facility to our visitors. The town of Bruchhausen-Vilsen and the charming countryside makes this an attractive place not only for railway enthusiasts but also for the whole family.

Furthermore the Deutscher Eisenbahn-Verein e.V. is publisher of the magazine "Die Museums-Eisenbahn - Zeitschrift für Kleinbahn-Geschichte". This magazine is the official newspaper of the society and is of use to the investigation and preservation of the local railways history in Germany. The magazine is published four times a year, usually every issue does include two profound main articles.